According to H. D.-Whyte et al.[1], the research on SLAM dates back to 1986, when the idea of using estimation-theoretic methods for robot localization and mapping were first discussed in IEEE Robotics and Automation Conference held in San Francisco. Yet it was until 1995 International Symposium on Robotics Research that the structure of the SLAM problem, the convergence result and the coining of the acronym SLAM were presented.

Early SLAM works mostly relied on odometry and laser/ultrasonic sensors as perception input, such as J. Leonard et al. [2] (with ultrasonic), and J. S. Gutmann et al. [3] (with laser). The theoretical fundamental and prototype of traditional Bayesian filtering based SLAM framework emerged in 1990s, and the notable work was from S. Thrun , D. Fox and W. Burgard [4], (as well as P. Newman et al. [5] sooner), all of which together with concerning basic theory and specific topics are thoroughly discussed in their later published book, Probabilistic Robotics [6].

Robot vision also began to boom in this period, important topics including visual odometry (VO) and structure from motion (SFM). Visual odometry is the process of estimating the ego-motion of a robot using only the input of a single or multiple cameras attached to it [7]. The history of VO, interestingly, dates back to early works [8] [9] motivated by the NASA Mars exploration program to provide all-terrain rovers with the capability to measure their 6-degree-of-freedom (DoF) motion in the presence of wheel slippage in uneven and rough terrains. SFM, investigating the problem of recovering relative camera poses and 3-D structure from a set of calibrated or un-calibrated camera images, is a larger and more general problem than VO, and can be considered as an early off-line version of visual SLAM [10]. Important SFM works were from A. Fitzgibbon in automatic camera pose recovery [11] and automatic 3-D model construction [12], M. Pollefeys [13] [14], etc. Both VO and SFM are based on the principles of visual multi-view geometry, which are well expounded in the famous book Multiple View Geometry in Computer Vision [15] by R. Hartley and A. Zisserman.

Meanwhile in early 2000s, there were several SLAM or related works also worth mentioning. M. Pupilli and A. Calway investigated utilizing particle filter instead of Gaussian filter framework in camera pose tracking and visual SLAM [19] [20]. Although more famous work of particle filter based SLAM is FastSLAM proposed by M. Montemerlo et al. [21], they used laser sensors instead of vision. Another significant work worth mentioning is in visual odometry from D. Nister et al. [22], who proposed methodology that sooner became almost ‘golden method’ for feature based VO and SFM, and are still frequently used in front-end of visual SLAM today. Another work that sooner became ‘golden method’ was in feature parameterisations from J. Montiel et al. [23], which used inverse depth instead of depth in feature position filter process.

Interesting enough, inspiring work that set a new standard framework for visual SLAM did not come from the mobile robotics community, but from two researchers on Augmented Reality (AR). In 2007, Georg Klein and David Murray proposed Parallel Tracking and Mapping (PTAM) for small AR workspace [24]. PTAM is also a feature-based SLAM algorithm that tracks and maps many (hundreds of) features to achieve robustness. Simultaneously, it runs in real-time by creatively parallelizing the motion estimation and mapping tasks and by relying on efficient keyframe-based Bundle Adjustment (BA) instead of Bayesian filtering for pose and map refinement, which are two main reasons to make PTAM outperform MonoSLAM and the like in both efficiency and precision. Although PTAM is designed specifically for AR application and only works well in small desktop space without global map management, its implementation style of parallelizing tracking and mapping and keyframe-based map management is used by most of modern feature based visual SLAM systems (like ORB-SLAM [25]) or VO systems (like SVO [26]).

In fact, keyframe-based map refinement with BA belongs to so-called `Graph SLAM’ techniques, as keyframes and map points are treated as nodes in a graph and optimized to minimize their measurement errors [27]. Graph SLAM is better than EKF SLAM in the sparsity of the graph and thus computational efficiency. Meanwhile in 2007, E. Eade and T. Drummond proposed an information filter based method of graph SLAM [28]. Information filter method is essentially similar to BA method in theory, but PTAM obviously achieved greater influence in visual SLAM research due to its creative implementation of parallel tracking and mapping.

Graph SLAM shows its advantages in large scale mapping, since a graph can be easily sparsified to reduce redundant information. M. Kaess, F. Dellaert et al.’s works, including Square Root SAM (Smoothing and Mapping) [29], iSAM [30] and iSAM2 [31], contributed a lot in theory for this problem. They investigated the theory and performance of graphical model for map representation and matrix factorization for valuable elimination and graph sparsification. Another famous work is FAB-MAP [32] by M. Cummins and P. Newman, which utilizes visual bag-of-words to do image retrieval for loop closure detection.

The problem of loop closure detection is still far from solved, with challenges mainly in place recognition in long-term SLAM [33], due to the illumination change, view-point change, dynamic or semi-dynamic objects and many other `pollution’ factors within one scene at different visited moments.

As robotics and computer vision both become considerately prominent research fields to the public, visual SLAM attracts a large number of researchers to devote their energy and intelligence for visual SLAM system development, and share their works in open source communities. Modern state of art visual SLAM systems are more like `systematic engineering’, building complete and practical systems with both trivial and non-trivial improvement techniques in theoretical and implementation level. They are built with many former researchers’ work results as foundation, for example the improved image feature detector and descriptors like ORB [34] provide real-time performance with desktop CPU which SIFT or SURF cannot provide; some nonlinear least square optimization libraries like g2o [27] provide utilities to do bundle adjustment, etc. Among them ORB-SLAM [25] by R. Mur-Artal et al. and LSD-SLAM (Large-Scale Direct Monocular SLAM) [35] by J. Engel et al. received much appreciation from the community.

ORB-SLAM is a more traditional feature based system, and quite similar to PTAM in some way, yet attains much more impressive performance in practice. Its main improvement compared to PTAM includes but not limited to: 1) implement 3 parallel threads, namely tracking, mapping, and loop closing to achieve consistent localization and mapping, while PTAM does not have loop closing; 2) automatic map initialization with a model selection on two paralleling thread calculating Homography and Fundamental ego-motion with RANSAC, while PTAM requires manual operation to finish initialization; 3) use ORB feature detector and descriptor instead of image patches used in PTAM, improving robustness of image tracking and feature matching under scale and orientation change; 4) multi-scale mapping, including local graph for pose bundle adjustment, co-visibility graph for local bundle adjustment, and essential graph for global bundle adjustment after loop closure detection.

LSD-SLAM is quite different from PTAM or ORB-SLAM. It should be classified into so-called direct methods, that is, doing state estimation based on image pixels directly, rather than relying on image features. The tracking is performed by se(3) image alignment using a coarse-to-fine algorithm with a robust Huber loss. Depth estimation is just like many other SLAM systems, using an inverse depth parametrization with a bundle of relatively small baseline image pairs. Map optimization is also executed in commonly used graph optimization, with existing keyframe poses expressed in sim(3) space just like ORB-SLAM does. LSD-SLAM actually recovers a ‘semi-dense’ map, since it only estimates depth at pixels solely near image boundaries, which may be the main reason for it to be the first direct visual SLAM system that can run in real-time on a CPU. In practice, processing every pixel over all image sequences is very computationally consuming, which is why many dense visual SLAM systems, like DTAM (Dense Tracking and Mapping) [36] by A. Davison’s group, require a GPU to attain real-time performance.

The maturity of visual SLAM can also be reflected from their application in commercial products, among which the Google Tango and Microsoft Hololens attract most interest from the public. It can be predicted that there will be more visual SLAM driven products appear in the near future.

As mentioned above, the main challenge in large scale mapping remains in long term visual place recognition. This problem is extremely difficult to solve based only on geometric methods, which are what most current visual SLAM systems use. These several years has seen some effort in utilizing semantic information in image to do object detection for mapping and scene recognition, such as SLAM++ [38] by R. F. Salas-Moreno et al. Due to complicated nature of place recognition problem, increasing number of researches on the utilization of visual semantic information in visual SLAM is predictable in recent future. In fact, this has already been happening, reflected by the frequent appearance of this topic in CVPR, RSS and ICRA workshops in recent years, as shown in Figure 3. 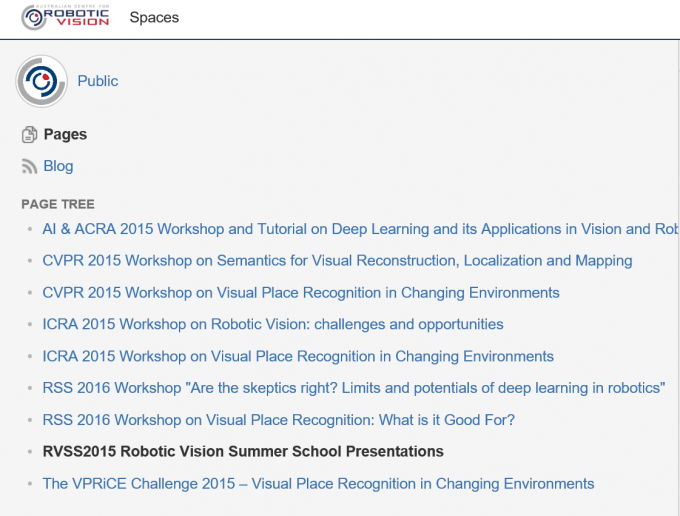 More Sensor Fusion: Towards Robustness for Practical Use

On the other hand, as geometric methods for visual SLAM gradually become mature, the day of its application in civil and industrial environment is approaching (or has approached, in some way, especially in VR/AR), which bring forward the issues of robustness. The state of art visual SLAM system mentioned above are far from being truly usable for mobile robot navigation (even if not consider the unrecovered scale problem of monocular vision). The leading limitation lies in their poor robustness. Robustness issue is an inherent problem of pure vision-based methods, due to the fact that image tracking is easy to fail in many motion modes and many environment structures. Therefore, research work on fusing image with other sensors to achieve robust mobile robot navigation is highly demanded.